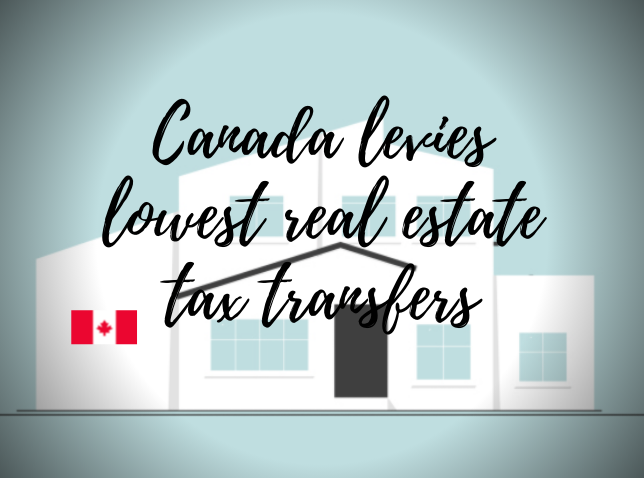 (July 25, 2016) Canada levies one of the lowest property transfer taxes in the world on real estate, charging on average 1.8% or USD $17,800, in tax on a property purchase of USD $1 million, reveals a new global study by UHY.

UHY observes that in Canada real estate transfer taxes can vary between municipalities and 1.8% represents an average of the rates charged in three of Canada’s largest cities, Montreal, Toronto, and Vancouver.

UHY says that major European economies including France, Germany, and Spain levy among the highest property transfer taxes in the world (see table below).

UHY’s findings show that at 11.3%* Belgium has the highest average property transfer taxes for real estate worth USD $1 million of any country in the study – a charge of USD $113,131. Other western European economies at the top of the table include France and Germany, charging USD $50,901 and USD $50,000 respectively.

New Zealand and Russia have the lowest taxes in the study, effectively charging 0% on prime property purchases.

New Zealand has no transaction taxes on real estate and residential property transfers between home owners, which are also exempt from the government’s Goods and Services tax. Similarly Russia imposes no transfer taxes on the buyer, who only pays a minor fixed amount of State Duty of approximately USD $30.

UHY tax professionals studied tax data for individuals purchasing a house worth USD$1 million in 26 countries across its international network, including all members of the G7, as well as key emerging economies.

Comments Ken Shemie, a partner at UHY Victor LLP: “Many economies risk over-exploiting property transfer taxes as a way to increase revenues, and it is encouraging to see Canada exercising restraint in this area.”

“Higher property purchase taxes can put a strain on Canadian buyers, who may not actually be particularly wealthy, given house price inflation in some locations in recent years.”

“The United States is seen as having enviable labour market mobility, and it has one of the lowest tax rates in our study. The low level of transfer tax enables US home owners to move more freely from city to city.”

“Levying significant taxes on the cost of a new property can also constrain labour market mobility. If businesses have to offer much greater incentives for senior executives to relocate, this could have a serious impact on job creation and business investment, and ultimately on the broader economy.”

Ken Shemie adds “Prime properties, especially in major cities, are particularly desirable for wealthy investors from overseas, but where there are excessively high taxes, these markets could become less attractive. Cities such as Paris or Berlin could lose out to locations such as Vancouver where property transfer taxes are seen as more reasonable.”

“These wealthy overseas investors contribute to the local economy in many other ways, through discretionary spending while they are staying in the property, as well as maintenance costs, for instance by refurbishing extensively, or employing staff.”

Residential property transfer taxes for the purchaser of a property worth USD$1,000,000

* This figure represents an average of the rates in Brussels, Flanders, and Wallonia which can vary from 9.8% to as high as 12.5%.
**Rates rounded to nearest tenth
***Rate paid on cadastral value of property, not market price; for Italy (based on 2015 data), it includes the law with the provision that the rate applies on the cadastral value of the property, which is largely lower than the market price
****Average of local variations

About UHY Victor LLP
UHY Victor LLP is a member of UHY, an international network of independent accounting and consulting firms with offices in major business centres throughout the world. Further information can be found at www.uhyvictor.com.

About UHY
Established in 1986 and based in London, UK, UHY is a network of independent audit, accounting, tax and consulting firms with offices in over 296 major business centres across more than 89 countries.

Our staff members, over 7,660 strong, are proud to be part of the 16th largest international accounting and consultancy network. Each member of UHY is a legally separate and independent firm. For further information on UHY please go to www.uhy.com.

Prev PostRelief from Regulation 102 Withholdings
Next PostUHY Global Study: Lower earners benefit most from global reductions in income taxes over the past two decades