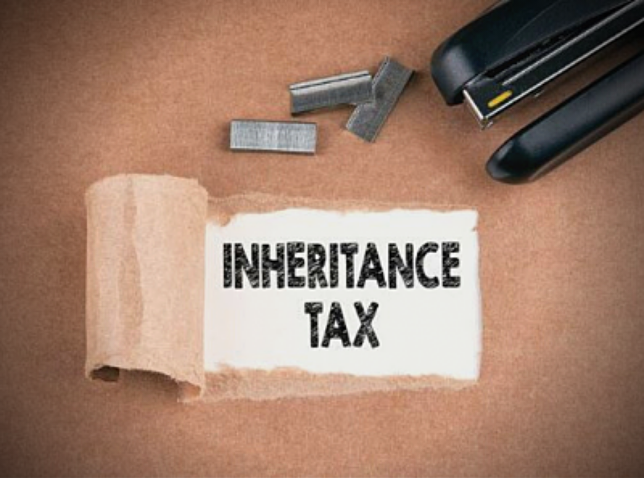 Inheritance tax rates in G7 and EU countries are ten times higher than those in emerging economies*, according to UHY, the international accountancy network.

UHY says IHT has been labelled an unfair ‘ death tax’ and some commentators have called for it to be abolished. Families in economies with high IHT rates can be hit with considerable tax bills at a time when they may be dealing with a bereavement.

IHT is also said to disincentive entrepreneurs from building their wealth on the basis that having faced high-income tax bills throughout their careers, their dependents then face high IHT charges on any residual wealth.

Dennis Petri, Chairman of UHY International and Partner at UHY Advisors, MI, US: “There is a stark difference in IHT between slower growth economies and faster-growing economies. The question is how much taxes on inheritance really discourage wealth creation.”

Some Governments of EU countries have faced pressure to reduce IHT rates to ease the burden on taxpayers. For example, IHT rates paid in Denmark and Belgium are consistently high across all the wealth bands covered in the study (see tables below).

Denmark is renowned for having a broad welfare system in which is funded in part by revenue generated from high tax levels, including income tax, property tax and IHT. However, criticism of high IHT rates in Denmark has grown in recent years.

High IHT rates in Belgium have pushed some high earners to use loopholes in the country’s tax system to avoid paying steep IHT bills. Whilst the Belgian Government introduced reforms in 2018 to help simplify the IHT system and to try to close loopholes, it has not reduced the tax rate.

The UK has also been criticised for making no substantial changes to the IHT system since the 1980s and for freezing the IHT threshold at 418,541 USD over a decade. This has served to increase the number of people being caught by the tax as incomes rise – HMRC collected a record 6.7 billion USD from IHT receipts in 2018/19***.

However, UHY adds that IHT has been used in some countries to help tackle wealth inequality. A recent study suggests**** that countries may need to go further than taxing incomes to help redistribute wealth to younger generations.

No inheritance tax in some emerging economies

Emerging economies that do not impose IHT include China, India and Russia. This compares to individuals in Japan who pay 38.5% (1.2million USD) in IHT when passing on 3 million USD of cash – the highest level in the study.

Dennis Petri adds: “Many emerging economies are especially keen to encourage wealth creation – levying very low or no IHT is seen as an important way to help achieve that.”

“Entrepreneurs may be incentivised to earn more in these countries as they can pass on their wealth to the next generation without the taxman interfering.”

“In emerging economies, inheritance tax can play a vital role in helping fund the early stages of new businesses, especially in countries where there are less traditional forms of finance available.”

Dennis Petri adds: “This study sheds light on the heavy tax burden that is shouldered by wealthy individuals living in some economies. There is the risk that an overbearing IHT regime could drive wealthy, mobile individuals to move to countries with more lenient regimes.”

“Despite many calling for ‘death taxes’ to be radically reformed or abolished altogether, Governments are often reliant on the substantial income streams generated by IHT receipts. This could suggest that IHT looks set to stay for the foreseeable future.”

Many emerging economies have resisted introducing IHT in an effort to attract investment. These countries include Croatia, Malaysia, Uruguay and Mexico.

Wealthy individuals may be attracted to set up businesses in countries with no IHT. This could support job creation, business investment and provide a source of vital economic growth.

**Source: UHY studies tax data in 28 countries across its international network. The study compared the ‘inheritance tax’ paid on 3 million USD of cash and real estate worth 3 million USD. The calculations are based on the deceased having two heirs receiving an equal share – both adult, non-dependent children. Both the deceased and heir are tax residents in the country

***** US charges no Federal Inheritance Tax on these sums. In those few states that do charge Inheritance Tax that tax does not apply if the individual relocates to one of the larger numbers of states that charge no tax eg Arizona, California, Florida, Texas etc.

All 28 countries ranked by the amount and the percentage of IHT individuals pay on handing down 350,000 USD of cash – G7 and EU countries impose the highest IHT rates on cash 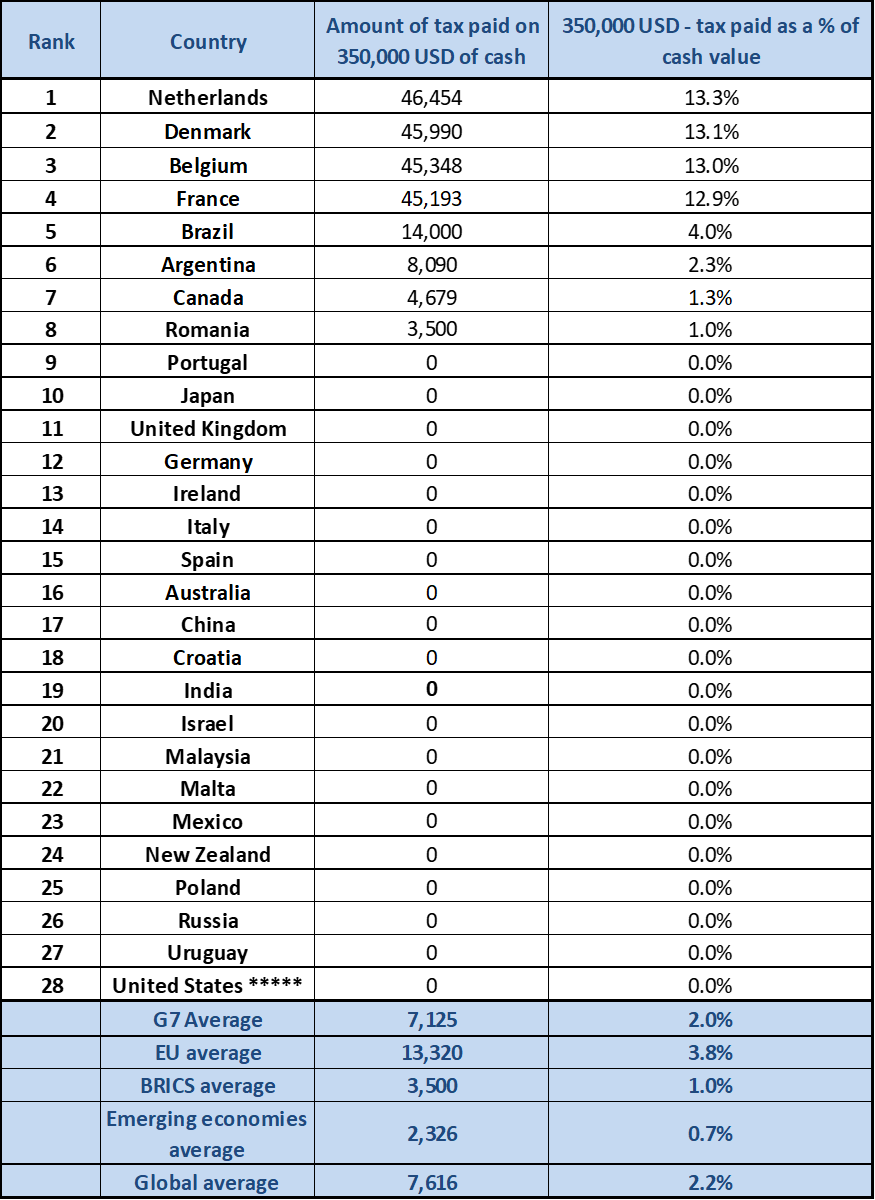 All 28 countries ranked by the amount and the percentage of IHT individuals pay on handing down 750,000 USD of cash – G7 and EU countries impose the highest IHT rates on cash

All 28 countries ranked by the amount and the percentage of IHT individuals pay on handing down 3,000,000 USD of cash – G7 and EU countries impose the highest IHT rates on cash

To learn more about the services and capabilities UHY Victor LLP can offer, please contact Jonathan Levy,  Partner, at Jlevy@uhyvictor.com

UHY Victor LLP is a member of UHY, an international network of independent accounting and consulting firms with offices in major business centres throughout the world.  Further information can be found at uhyvictor.com 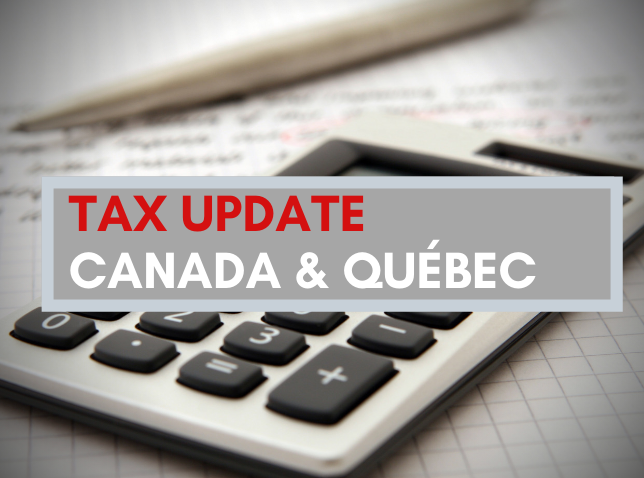 UHY Victor is taking action to maintain the health and welfare of our team, our clients and support communal efforts to respond to the coronavirus pandemic.

UHY Victor will remain open during this difficult period and client services will continue. We have implemented contingency plans which allow us to continue to operate as we all deal with the spreading pandemic.

In light of the present situation we have introduced the following measures:

UHY Victor will continue to monitor the changing situation and, will respond proactively as this major health challenge evolves.

We encourage all to stay informed and to visit the Public Health Agency of Canada COVID-19 site, and follow the guidelines set out by the government of Canada:

For more information on the guidelines of the Government of Canada on how to be prepared for COVID-19: Click here.